xyControl is a Quadrocopter Flight Controller based on Atmels Atmega2560 microcontroller. It features 512KB SRAM on-board, using the external memory interface of this processor. Also included is a switched power supply as well as a USB connection to communicate with and program the target. All I/O pins, including 3 additional UARTs, SPI, I2C (TWI) and 16 ADC Channels, are accessible via standard 2.54mm connectors. The Board can be powered from an external stable 5V supply, USB or 7V or more, via the on-board switched power supply. All voltage sources can be selected via jumpers. 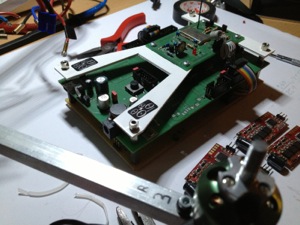 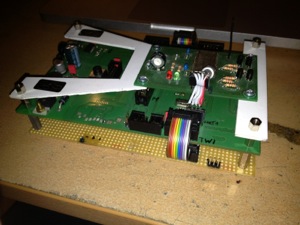 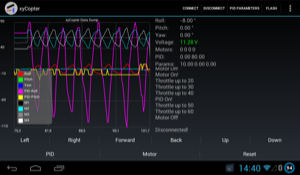 Three tasks are controlling the Quadrocopter Orientation in Space.

The data and bss memory sections, as well as the Stack are located in the internal RAM. The external RAM is used only for dynamically allocated memory.

Calculates the current angles of the platform, using Gyroscope and Accelerometer Data with a Kalman Filter. It is using this slightly modified Kalman Filter Implementation by Linus Helgesson.

You can find some PC Software in the tools directory. Each one should be accompanied by it's own Readme file.

Everything else is released under a BSD-Style license. See the accompanying COPYING file.